Note: This page used to be hosted on Unity Connect for the 2018 Unity2D Challenge until the website was taken down on February 4th, 2021.

Take to the skies in this whimsical, fantastic flier.

I’m a bit late to the party (started mid-November), but this is my work in progress for the Unity 2D Challenge. I plan to update this page as I make progress over the coming weeks. Consider this a stream of consciousness.

A short trailer highlighting all the progress made for the challenge.

I wanted to try out Unity’s new Vector Graphics (SVG) Package, but in a way that uniquely took advantage of the high resolution assets. I wanted to challenge myself to come up with an idea that couldn’t feasibly be done with raster-based pixel graphics.

I also wanted to keep the project scope small, as to actually have a snowball’s chance in hell of finishing something. Thus, on a cold winter’s night, I downloaded Unity 2018.2.15f1 and started prototyping.

In the spirit of keeping things simple, the whole game will be playable with just the mouse. The levels will be “procedurally” generated in chunks and the goal will be to achieve the highest score without crashing.

More points will be awarded for flying through rings as the level speeds up over time. As a reward for flying close to the ground, you’ll earn double points (as indicated by the airplane’s auto-deploying landing gear).

"Accidentally" flying into a mountain to show the game over transition.

Landing gear auto-deploys when near the ground to show 2x point bonus.

The pause screen, because why not?

Some primitive water... and a bridge!

To adhere to the challenge guidelines, everything in the game is rendered using 2D vector graphics. The camera is using a Perspective Projection to let us take advantage of the parallax scrolling effect. As you can see below, different parts of the airplane are actually positioned at slightly different depths to give some sense of 3D as the airplane moves about. I’ve also given the tail section additional logic to slide side-to-side when turning, and the propeller rotates based on the player’s speed (you know, for “realism”). 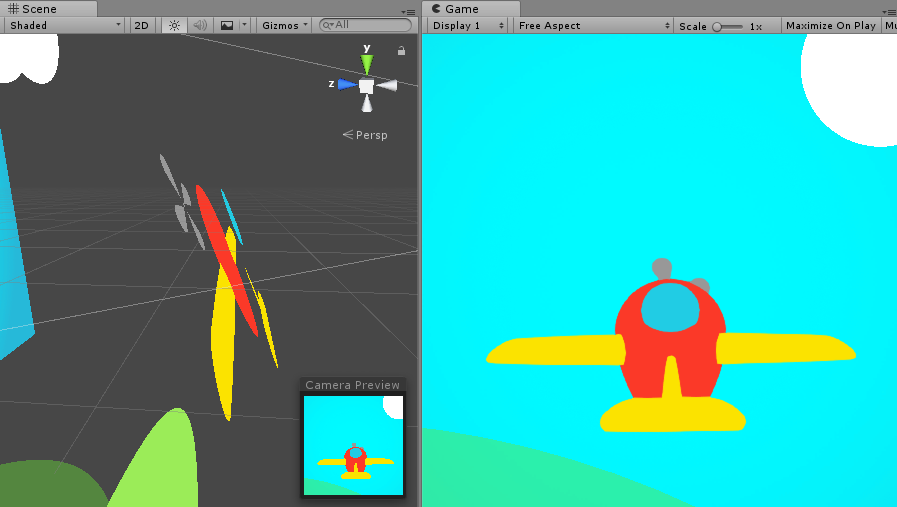 The parallax effect as seen on a level slice.

Another secret is that the camera doesn’t actually move! It’s fixed in space while the level spawns in chunks and scrolls by. When a level piece spawns, it moves along the z-axis by a constant speed and the xy-axis by -Player.Velocity to give the feeling that the player is moving towards the pieces. The player remains at a fixed z-position, but moves freely along the x and y axis.

Showing how the level scrolls past a fixed-position camera.
Also notice the smooth quaternion rotations on the airplane.

The reason for this camera trickery is to simplify collision detection. Because everything is using 2D assets, the colliders are also using 2D physics. But how can we use 2D physics in this pseudo-3D prototype? By keeping the colliders disabled until their z-positions reach 0 (the same z-value the player is restricted to). The colliders are then enabled for one frame so Unity fires the OnCollisionEnter2D callback. There, that wasn’t so hard now was it!

Objects flash yellow when their collider is enabled. The player turns red when hit.

Due to the nature of having many GameObjects moving at different z-depths, I opted to keep everything in the Default SortingLayer and assign their OrderInLayer property dynamically based on transform.position.z. The only caveat with this approach is that the player airplane actually uses five unique layer indices for sorting the individual parts. This caused a bug where parts of the player would clip through objects at different rates, so I had to reserve the 0 - 4 layer range for only the player, and all other scrolling objects skip over that range.

Very early on, I noticed it was very difficult to judge the player’s depth correctly. Enter: Fake Shadows™️. Normally you’d add a flat ground plane and give everything projector shadows with fixed y-positions, but I didn’t like the aesthetic of a flat ground and wanted to support hills, mountains and eventually other hazards.

Calculating the y-positions of spot shadows.

The problem with a non-flat ground approach is figuring out how to calculate the y-position of these shadows. They need to move based on their z-distance, but because all the colliders are 2D, we have no real depth information here. After a couple failed approaches, I came up with a somewhat clever and simple algorithm:

If you haven’t heard of noise generators before, don’t fret! They’re actually a lot simpler than they seem. Unity has a fantastic noise generation function: Mathf.PerlinNoise. I created a small helper component AmbientMotion to generate noise based on speed, min/max ranges and modify a transform’s position, scale or rotation. I then added a mixture of these to the airplane and title screen elements to give the prototype a little extra juice.

As an aside, that’s probably my single favorite part of working with Unity: the ability to easily create building blocks that can be used together to amount to something greater than the sum of their parts.

Pro Tip: Replace your calls to Mathf.Lerp with Mathf.SmoothStep. You can thank me later.

Another workflow I’ve found useful is to create a custom EditorWindow for your game-specific needs. In my case, I wanted to quickly and easily view and edit the world transform of a GameObject (for debugging the shadow positions). This sounds simple, but the Unity Inspector actually only shows you the local transform. If your GameObject is nested, there isn’t a quick way to see its world information. Until now. 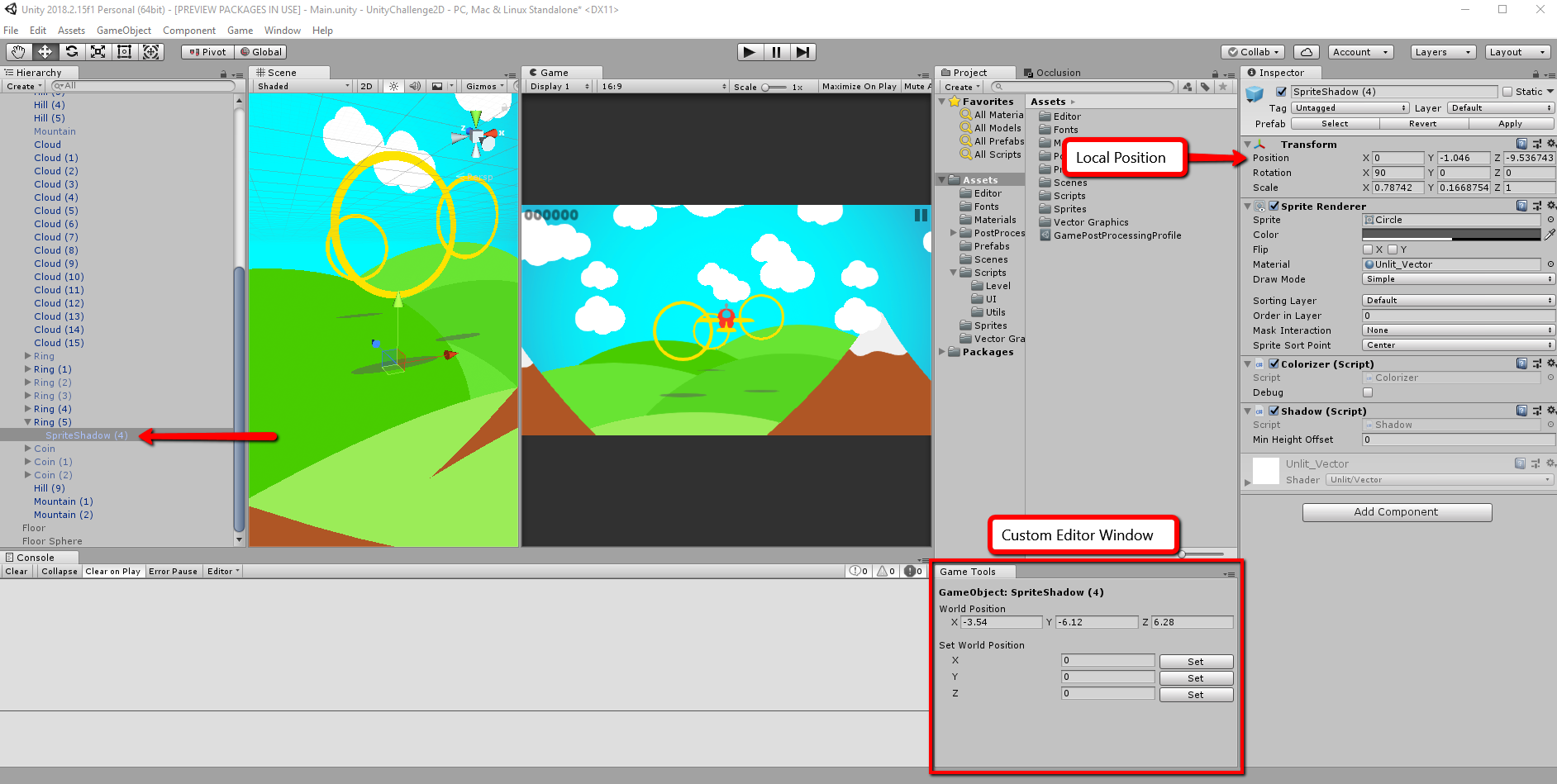 A custom EditorWindow panel for viewing and editing world positions.

Pro Tip: You could also create a custom inspector to do this, but I often find that I end up adding more tools to the EditorWindow over time anyway, so it’s more convenient.

Place this script in an Editor folder within your project and it will create a new menu item called Game -> Tools.

It even works with undo/redo!

The quickest way to make any Unity game look good is with post-process effects, and the new PostProcessing stack makes this super easy. The only downside with 2D assets is that ZWrite is off by default, so many of the effects don’t have depth information to render correctly (Ambient Occlusion, Depth of Field, Fog, Motion Blur, etc). However, Antialiasing looks fantastic with vector graphics and I highly recommend using FXAA. 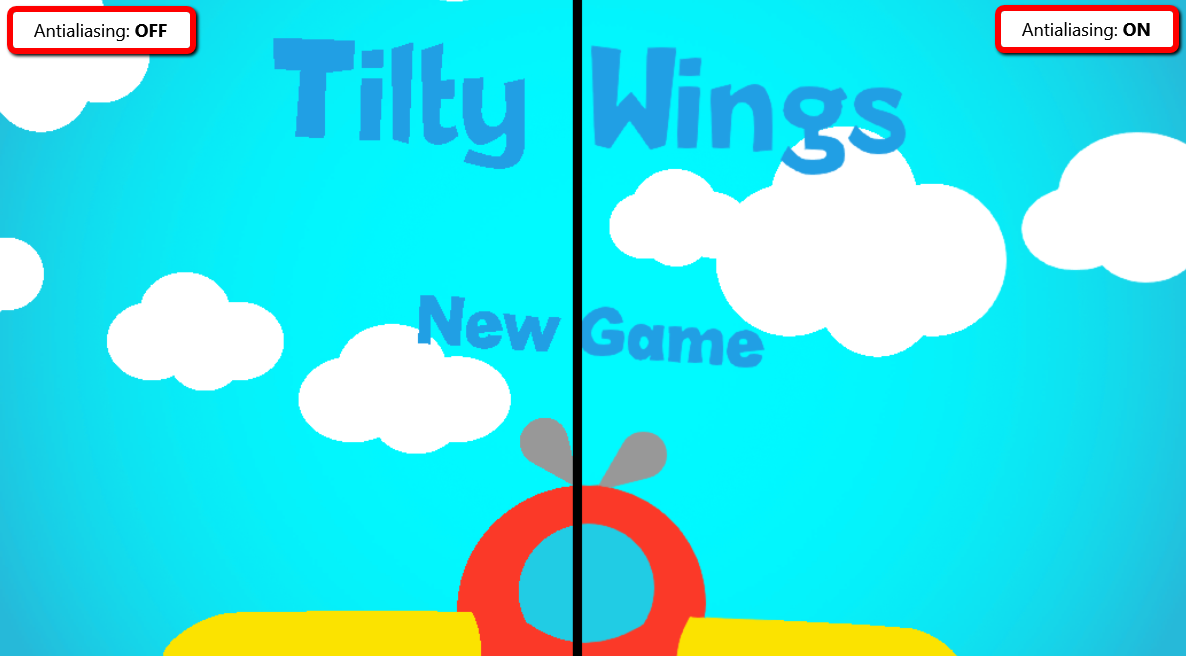 And even though we don’t have correct depth information, I’m still using the Depth of Field effect to blur everything but the UI layer on the game over screen. This works quite well, as interpolating the aperture results in a smooth transition. 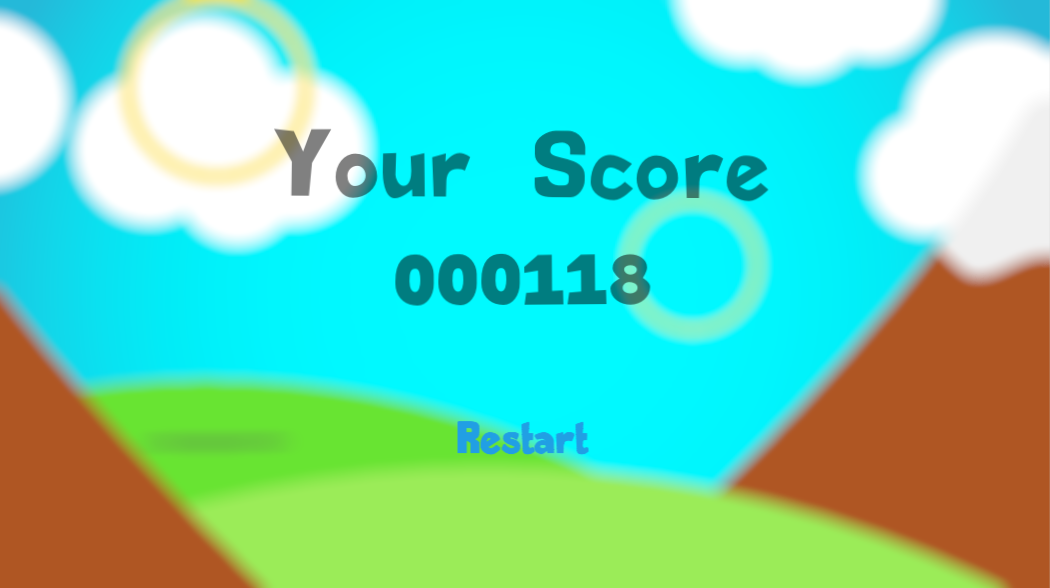 Depth of Field effect to smoothly blur the background.

Speaking of interpolation, I noticed I was animating many different variables throughout the code, so I tried to make life easier by utilizing Coroutines, C# Extensions and Actions to simplify this process. This is going to get a bit technical, but I wanted to share these utilities because they’re simple and easy to use.

For example, to interpolate the DoF aperture:

This keeps the camera logic clean by moving the workhorse logic into these extensions:

The Animate(from, to, duration, delay, callback) method can now be used from any MonoBehavior to interpolate whatever value you want. Think of it like a lightweight and convenient iTween or LeanTween library replacement.

Pro Tip: If you want to animate something while the game is paused (and you’ve set Time.timeScale to zero) you can replace the above calls to Time.time with Time.realtimeSinceStartup.

Because the airplane doesn’t actually move in the z-axis, the default TrailRenderer won’t produce a trail effect with any depth. Fortunately, Unity exposes everything we need from the TrailRenderer class to add our own mock velocity vector! 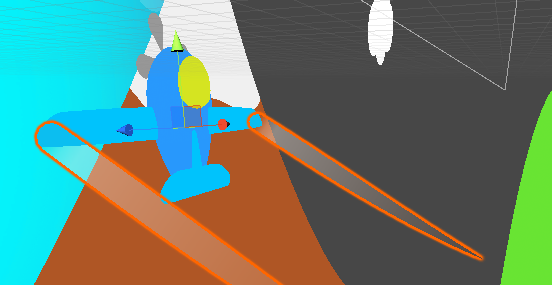 This proves to be much simpler than trying to modify a LineRenderer, for example.

I added a couple wing lights to indicate when the click-to-roll ability is ready. It’s currently set to a 2.5s cool down for gameplay balance.

Initially I had a radial filling UI widget follow the mouse cursor to indicate the cool down status, but it made more sense to keep the information on the player because that’s where you’re always looking.

I also added landing gear that auto-deploys when the player is within 3 units of the ground. This helps so you don’t have to look at the HUD to know when the 2x points boost is active.

A vector illustration, with a dapper pilot.

As I continue to use the new 2D APIs, I’ve run into a few issues that I’ve been working with the Unity devs to resolve in the forums. I’ll try to document and summarize them here (my way of giving back): 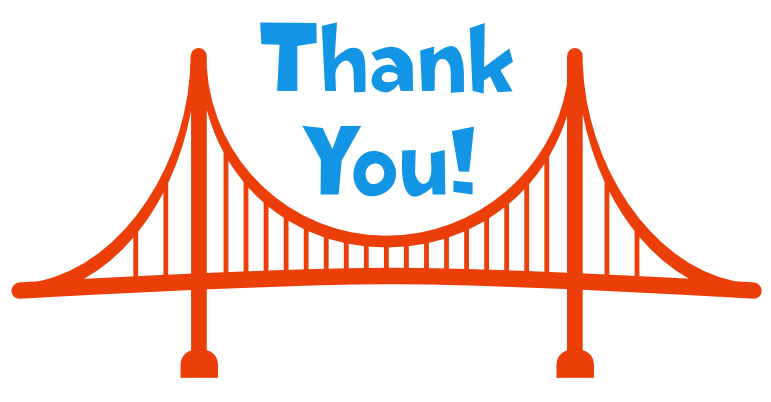